Over the past few years we’ve heard a number of alternative dangerous dog’ solutions proposed. Ways and means by which we can prevent dog attacks from occurring. Ideas and suggestions which can help us rid ourselves of the menace of dog attacks.

One of the most common ideas put forward seems, on the face of it, to be entirely sensible: to muzzle all dogs and keep them confined to a lead at all times in public. Well, whilst it may seem sensible — unfortunately, it is not. In fact I speculate that if we want to literally DOUBLE the number of dog attacks, especially the most serious ones, the way to do it would be to muzzle and confine all dogs to leads in public. I shall hereby try and explain the flaws in this ideology.

Dogs operate in and have personalities which can be linked to something known as drives’. Whilst it is not my intent to make this a technical’ dog behaviour article I shall list the recognised drives below:

* The Prey drive: these dogs stalk, kill’ their toys, shake objects and are highly stimulated by visual movements. They like to chase.
* The Pack drive: these dogs are sociable animals who enjoy being touched by people, prone to separation anxiety.
* The Fight drive: self confident or dominant’ dogs who will guard themselves, their property, their family. Tends to hold strong eye contact even with dominant’ people.
* The Flight drive: unsure in strange situations, always needs to be aware of a potential route of escape, tends to be submissive and is most prone to fear biting’. 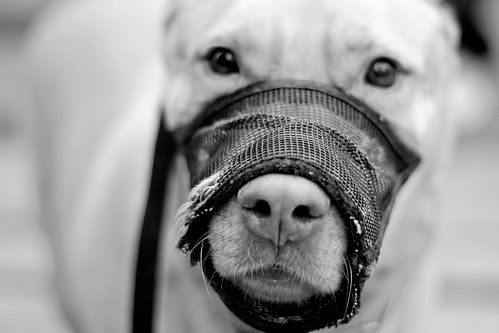 Dogs may show a tendency to be a high prey drive’ dog or dogs may exhibit high drive behaviour in certain circumstances — for example, a dog which may — by normal personality — operate for most of its life in pack drive’, a friendly dog that loves people for instance, upon encountering its first ever squirrel the dog may instantly switch on to a very high prey drive response.

So it’s not a simple case of being able to label one dog or breed as a particular candidate to fit one of the drive descriptions. Yes, we can generalise (Bull breed dogs tend to score highly on pack drive, they love people, love being touched, enjoy companionship) but these generalisations are what have gotten us in to trouble in the first place!

We simply cannot and should not attempt to define a dog’s personality by its breed type or EVEN its past history. For instance, a dog which has — for its entire life — never been nervous or aggressive about ANYTHING, when faced with a certain new situation or circumstance may exhibit high levels of unplanned for’ behaviour. I often ask people to imagine in their mind how they feel about elephants.

How do they feel when they see elephants on TV on a nature documentary. Most people have neutral views about elephants. We don’t live our lives in fear of them and they are not an animal that invades our daily thoughts. We have no planned for’ elephant response behaviour.

I then ask people to try and imagine how they’d feel if they walked into a room — a room they recognise and have used before, let’s say their boardroom at their place of work — and rather than being confronted by their work colleagues, much to their surprise a fully grown elephant is standing in the room.

Now imagine how you might feel about elephants in THAT circumstance! Heart rate rised, shock, surprise, nervous tension, wonderment, planning for an escape route, sweaty palms — we have no idea how we’d respond to surprising circumstances, especially ones we’ve never planned for — yet we somehow expect our dogs to react consistently to all circumstances based on how they’ve behaved in the past. This is an error.

But what’s this got to do with muzzling and lead confinement you ask?

Well it’s all about the need for owners to be able to do two very, very (very) important things:

So let’s tackle these two issues.

Allowing a dog to exhibit normal behaviour means allowing a dog to exercise freely. There are some dogs — in fact most dogs — who absolutely thrive on the freedom to run and shake loose the constraints of a leash or the confinement of the four walls of their home and garden. To many dogs, this is their reason to live’. This is their most treasured treat. It also keeps them healthy. If we are to constrain dogs and deny them the ability to exercise freely, a number of things will start to happen and start to happen quickly:

The dogs will start to become very, very wound up at home. Too much energy, no outlet for it. Anyone who has ever had to spend time in a confined space will realise how tedious that becomes. Think of a long-haul flight for an example. Sitting there, waiting for someone else to provide you with release’, waiting for someone else to feed you, relying on others for your stimulation. Now imagine that your entire life was spent on a long-haul flight. I project you’ll do one of two things: You’ll either go quietly mad and spend your days asleep in a permanent bout of depression or you’ll go VERY mad and start threatening to to do crazy’ things in order to get your freedom back. To confine dogs to a permanent life on a long-haul flight will cause a lot of problems.

Dogs will begin to attack more people in their homes. No doubt about it. A dog who is wound up’ a dog who has more energy than they are ever permitted to expend will be a problem dog. If we estimate that 2, maybe 3% of all the dogs in the UK are responsible for attacks and injuries caused by dogs as things stand today — by having a blanket no dogs off lead in public’ law, you can comfortably project that we’ll have maybe as high as 20% of dogs who will pose a far greater risk to people. Yes, we may reduce dog attacks in public but my word, we will massively increase the number of attacks in the home. The net result will be more attacks.

Dogs need off lead exercise and they need the ability to socialise with other dogs. Dogs owners should understand that they have an obligation to keep their dogs under control (and do it! Not just understand it) and they should also recognise that dogs can have very, very different reactions to situations which are unplanned for’. Again, think about how you’d react if you met a real life elephant face to face in a place where you were not expecting it. Don’t assume that dogs can’t have equally extreme reactions to new things.

Similar to the freedom to run argument. If you take away a dog’s defence mechanisms: either the ability to run away or the ability to fight’ you will instantly place the dog into a state of heightened tension.

I want you to think about that elephant again folks. Let us say that you have met the elephant in the boardroom and you’ve just managed to calm your nerves, your blood pressure is lower and your starting to feel a bit more comfortable. No doubt you’ll still be very aware of the fact that there is an elephant in the room but you’ve just about managed to compose yourself. Firstly, you have the door behind you so if things take a turn for the unexpected you can always leg it! Only, now you can’t. Because what’s going to happen now is you are going to be tethered to the radiator and your hands are going to be tied behind your back. How you feeling now? A little less composed? A little vulnerable? Nervous? Tense?

See this is exactly what we do when we impose on our dogs a mandatory constraint. We can — in one fell swoop — make a non aggressive, non defensive dog INSTANTLY more aggressive and more defensive. We can increase the risk of altering the dog’s nature and outlook on life. And again, whilst it is certainly the case that we may (in fact probably would) see a reduction in dog attacks in public, the net result of such a law would be a massive, massive increase in the number of dog attacks occurring in the home.

Because we will be artificially increasing the drive senses in our dogs. We can’t muzzle a dog all day, we can’t tether a dog all day so for those periods of time when they are unmuzzled we will see a dog with an altered personality. Heightened defensiveness, heightened nervousness — we would make some non aggressive dogs aggressive and some aggressive dogs even more aggressive. Times where the dog is feeding would be exceptionally dangerous. The net result would be more dog attacks.

The solution, whilst simple, is not easy. Dog owners need to better informed on how to manage their animals. They need to be better prepared for the reality that their dogs can and will behave differently in different situations, never assume. They must have better control of their dogs. If they can not recall their dog then they simply should not have the dog off a lead until such a time as that training objective has been achieved. Dog owners need to be aware of the fact that their dogs should not invade other people’s space. Dog owners need to take control of their dogs and to improve their ownership standards. If we could make this happen, society, dogs and their owners would be a lot, lot happier.

—-
Well, that’s MY view – compulsory muzzling of all dogs would make the problem worse, but what do YOU think?

Have your say using the comment form below. I look forward to reading your views!

192 comments on “Should We Muzzle ALL Dogs In Public?”