Academic research has revealed that dog owners are happier, healthier and likely to live longer. Whilst it has been established for some time that pet ownership makes people happier, it has now been shown that the benefits of owning a dog outstrip those of cat or any other animal. 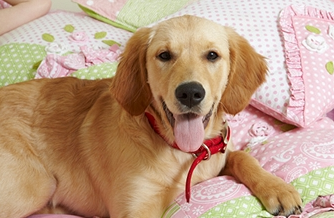 Writing in the British Journal of Health Psychology, she says that regular 'walkies' may partly explain the difference.

In some cases, the research even ventured as far to suggest the social support offered by an animal is greater than the support than another human could offer.

She confirmed that pet owners tended in general to be healthier than the average member of the population.

As well as lower blood and cholesterol levels, dog-owners suffered fewer minor ailments and serious medical problems than owners of other pets such as cats.

It has been believed for some time that dogs can assist people in recovery from serious illnesses such as heart attacks, and act as 'early warning' to detect an approaching epileptic seizure. This research adds further strength to the claim.

Dr Wells was not totally sure why, exactly, dogs are so beneficial to our health:

"It is possible that dogs can directly promote our well-being by buffering us from stress, one of the major risk factors associated with ill-health.

"The ownership of a dog can also lead to increases in physical activity and facilitate the development of social contacts, which may enhance both physiological and psychological human health in a more indirect manner."

Summary: The Health Benefits of Owning a Dog

1. Children. Studies have shown that children who grow up with dogs have more advanced coping skills as adults. Understanding responsibilities, socialisation and caring for others are just three of the stronger reasons why children and dogs are a great combination.

2. Fitness. Owning a dog requires walking a dog. Sometimes we all need a motivation to get out and move on a cold, wet British morning. Dogs give us that motivation.

3. Allergies. Did you know people who have dogs in the household suffer less allergies? (Source)

4. Stress reduction. There's good reason so many dogs are now being taken in to hospitals and care homes. It's been shown that simply stroking a dog can lower blood pressure and reduce stress.

5. Surprising. A study published in the Journal of Pediatrics in 2011, followed 636 children and found the rate of eczema was lower among kids who lived with a family dog. In fact, even for kids sensitive to dog allergens, having a dog did not increase their risk of developing eczema.

All this before we even begin talking about the numerous dogs who have saved human lives, the mental stimulation they offer and a whole host of other incredible benefits offered by the animal who has truly earned the title of man's best friend.