Read my dog articles and the story of how I created a career from my biggest passion..

How One Dog Changed My Entire Life

“Every boy should have two things: a dog, and a mother willing to let him have one” – Anonymous

Me and My Dog: by Ryan O’Meara

Since as far back as I can remember I wanted a dog. Probably like a lot of children who want a dog only I can safely say my desire for a dog was bordering on obsessive. My family were never really ‘doggy people’ and so I never got a dog as a child, instead I was ‘fobbed off’ with ‘practice pets’ such as fish, birds, rabbits etc. All of which were designed to prove that I was not responsible enough to own a dog. In the end, it worked. My parents won. I would always eventually prove myself disinterested in anything fur or feather unless it was attached to an animal with a wagging tail. As a result of failing the challenges of the practice pets, the dog I always wanted looked further and further out of my grasp. I never lost hope though.

My obsession for dogs followed me through my school days. I decided very early on in life that the only job I ever wanted to do was to become a dog trainer. I was actually quite specific about it too. I didn’t want to be a vet, a groomer, a puppy socialiser or a dog food salesman, I specifically wanted to train dogs for a living, which was quite odd considering I hadn’t got a dog of my own or the faintest idea how to go about achieving the career of my dreams.

I remember every careers meeting I ever had at school was always very difficult for the person tasked with advising me. They just didn’t know what to tell me to help me on the path to becoming a dog trainer so again, I was left disappointed.

When I turned 16 I had an idea one day. It dawned on me that I was legally old enough to own a motorcycle. I didn’t actually want a motorcycle but I did know for sure that there was one person I knew who would be even less keen than me about the whole idea, my Mum.

So one evening I casually mentioned that I would be selling my computer and pretty much all my other possessions of value in order to fund a motorcycle. I dropped the bombshell, then waited. 3, 2, 1, bingo! “What? Why? No!” She was absolutely aghast at the idea. She pleaded with me to reconsider, to wait another year and get a car, to do anything but get a bike. Anything? I thought. Now that’s interesting.

“Well. I suppose I might go off the idea if I had something else to fill my time. I don’t suppose it’s even worth asking – after 16 years – if I can get that dog I’ve always wanted. Now that would be something that would distract me from my motorcycle dreams?”

Like a treat, my plan worked. I was made a deal there and then, set it stone. I could (finally) have a dog provided I solemnly promised never to own a motorbike as long as I lived. “Deal!”

I had finally got the green light to get a dog and even though I was no longer 10 years of age, I felt like it. I had spent my whole life preparing. I knew what type of dog I wanted, I knew what I was going to call it, I knew what I’d be doing with it every day.
First clause of the ‘dog contract’. I had to be 100% responsible for this dog. I had to raise the money to pay for it and I would be responsible for looking after it forever (and ever). No problem. The same day I put all my worldly goods up for sale and waited for the phone to ring.

After a week, I had the cash and the ‘right’ to and get that dog I’d always dreamed of.
I wanted a Labrador. I’d already been to see the litter I was picking from but finally the day arrived when I was going to pick out MY puppy and bring him home. I was at the gates of the kennels before they were even open, waiting to go in and choose my dog.

After several pacing sessions up and down the blocks of kennels where these 8 Labrador puppies were all paired up I made my choice. Or more to the point, he chose me. I’d tired all the pups out with my dalliance. They went back to their beds after the excitement of my initial arrival had died down. All bar one puppy. He was still just as excited.

I called him Jackson and he, without a shadow of a doubt, changed the entire direction of my life forever.

I spent every waking (and sleeping) hour with him. I had dreamt about what it would be like to be a dog owner but I didn’t think for a second it would be as good as I’d imagined. In reality, it was a thousand times better. Me and Jackson were inseparable.

The day I finished my exams at school I wanted to leave full time education there and then. I knew I hadn’t done well. I never tried at school. I wanted to be a dog trainer and could never work out how fractions and French was going to help me achieve it. I was told by my parents that I could leave school providing I immediately looked for a job. So as soon as I got home I went straight to the jobs section of the local paper. Tucked away in a little corner of the ads page: “Dog trainer wanted”. To this day I’ve never seen an advert like it in my local paper. If there is such as thing as destiny, it was on my side on that day.

I decided I didn’t need a CV when I went for my interview. After all, I had no experience. All I had for my ‘portfolio’ was Jackson. He was evidence of my work. I took him along and showed him off. I pleaded for the job. I stressed how important it was to me and I even said I’d do the job for no pay. I’m pretty sure offering to work for nothing was proof of my commitment but it was Jackson who was proof of my connection with canines.

I got the job. I became a dog trainer. Life was perfect.

After a couple of years I got a promotion from my dog training job. Jackson, along with some new charges, won some competitions and I actually got pretty good at what I was doing. I moved to Suffolk to work under the guidance of one of the world’s most successful dog trainers in his field. I learned more and I improved my techniques. I met thousands of dogs. I trained all day. I was living my dream with Jackson alongside me. He and I had the perfect lives together.

However, fate dealt me an unwanted twist. I was diagnosed with Chrons disease. A debilitating condition that affected my stomach. It stopped me in my tracks on regular occasions. Many stays in hospital, a few by way of ambulance, more drips, injections and blood samples than I care to remember and all round a thoroughly unpleasant experience.

I knew I would have to consider my long term health. Doing a physically demanding outdoor job was going to be a struggle. So I started to look around. I thought long term the best thing I could do is become a kennel owner. If I could run the business rather than be the relied upon hired help, I could have more control over what I did.

It was in doing this research that I discovered something. There was very little in existence in terms of magazines, websites or general information for people who are into dogs. A light bulb moment. I’ll become a publisher of pet related media.

In 2008 K9 Media Ltd is the largest independent publisher of pet content with a portfolio of two national magazines and 37 websites aimed at pet owners.

The business took an award in 1999 and has gone from strength to strength in terms of audience and financial growth.

I still remember the nights where I’d be doubled up in pain, suffering with my stomach during a Chrons flare up, Jackson would, somehow, make it more bearable. I still remember relying on him when I’d literally be unable to walk upright. I still remember him doing what dog’s do and somehow understanding whenever I was ill and acting in a more considerate way around me. I always dreamt of what it would be like and my imagination was filled with images of fun. I never dreamt that having a dog would also get me through the darkest times in my life.

In November of 2005, on a dreadful Saturday afternoon, Jackson died. I was the last person he saw. He didn’t suffer and he didn’t even leave me having to make that traumatic life of death decision of having to have a loved pet put to sleep. He woke up in the morning his usual self, a lively – albeit more pedestrian – 13 year old Labrador. By six o’clock in the evening, he was gone. As long as I’m alive, no person could ever have the impact on shaping my life as much as that dog did.

In 2007 I launched a website by the name of DogsBlog.com. The aim was simple. To try and help get more homeless dogs out of the UK animal welfare shelters and into new, loving, permanent homes. By April of 2008 over 1700 dogs had found new owners as a result of DogsBlog.com and in 2011 that number has gone over 15,000 dogs who have found new homes thanks to the site. If just one of those dogs can have the impact on someone’s life that Jackson had on mine then Jackson’s impact will continue much farther and wider than I could ever have imagined on that day when I went to pick him up from the kennels. He threw up on me on the car ride back home. It was the best day of my life. 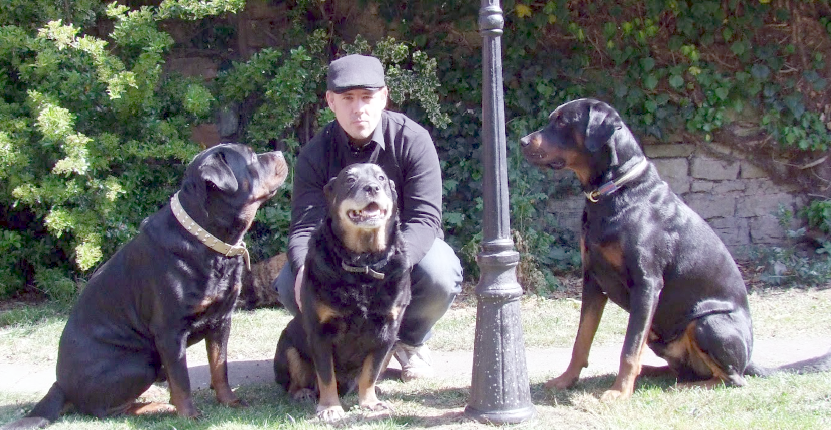