According to research by scientists, dogs can display signs of jealousy comparable to humans.

Personally, I don’t believe they do and I’ll explain more about that in a moment. But first let us look at the new research done in the name of science.

The experiment consisted of taking pairs of dogs and getting them to present a paw for a reward. On giving this ”handshake” the dogs received a piece of food. 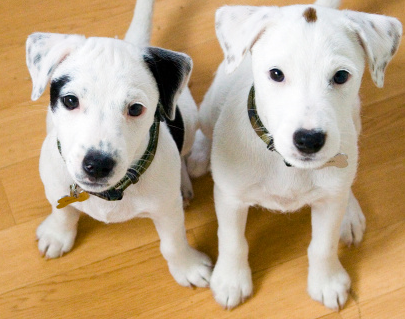 One of the dogs was then asked to shake hands, but received no food. The other dog continued to get the food when it was asked to perform the task.

The dog without the reward quickly stopped doing the task, and showed signs of annoyance or stress when its partner was rewarded.

To make sure that the experiment was really showing the interaction between the dogs rather than just the frustration of not being rewarded, a similar experiment was conducted where the dogs performed the task without the partner. Here they continued to present the paw for much longer.

Dr Frederike Range from the department of neurobiology and cognition research at the University of Vienna, says this shows that it was the presence of the rewarded partner which was the greater influence on their behaviour.

”The only difference is one gets food and the other doesn’t, they are responding to being unequally rewarded.” she said.

The researchers say this kind of behavior, where one animal gets frustrated with what is happening with another, has only been observed in primates before.

Studies with various types of monkeys and chimpanzees show they react not only to seeing their partners receiving rewards when they are not, but also to the type of reward.

The dog study also looked at whether the type of reward made a difference. Dogs were given either bread or sausage, but seemed to react equally to either. Dr Range says this may be because they have been trained.

”It’s through the fact they have to work for the reward, this confers it with a higher value,” she said.

Let’s take a look at this in smaller chunks.

The dog without the reward quickly stopped doing the task, and showed signs of annoyance or stress when its partner was rewarded.

Well of course. Surely we wouldn’t expect anything different here? The dog wants the food and it sees the other dog with the food and it gravitates toward the treat. This is quite logical, nothing ground breaking yet.

To make sure that the experiment was really showing the interaction between the dogs rather than just the frustration of not being rewarded, a similar experiment was conducted where the dogs performed the task without the partner. Here they continued to present the paw for much longer.

Yes, again this surely to be expected? Here we have a dog with no distraction, no food or other dog in the equation and it makes logical sense that most dogs will perform differently in a situation where no distraction — of any kind — is present. This, again, does not prove jealousy as we understand it.

Dr Frederike Range from the department of neurobiology and cognition research at the University of Vienna, says this shows that it was the presence of the rewarded partner which was the greater influence on their behavior.

Now we’re veering in to some strange territory. Let us imagine this experiment but with some different parameters.

We work with just one dog, no other dog in the area.

The dog gives its paw. Then a person will come in to the room and puts some food on the floor near to where the other dog would have been positioned.

In my opinion, yes. Most likely.

Now repeat the same scenario but don’t have anyone put food down.

It’s my supposition that the dog would hold paw for longer.

No other dog present, no jealousy — merely distraction causing reaction.

The dog study also looked at whether the type of reward made a difference. Dogs were given either bread or sausage, but seemed to react equally to either. Dr Range says this may be because they have been trained.

Dogs like different foods. And scientists didn’t know this?

Take my own dog Mia. She loathes banana. My other dog, Chloe, on the other hand loves fruit. So if I’m eating a banana Mia will sit for a while, realise what I’ve got and then go and lie down. Chloe will stay sitting next to me, watching until I’ve finished. I’m not a scientist but I do know this — it’s……wait for it………

Given that Mia is by far the greedier of my two dogs it proves that dogs clearly have different tastes the same as we do, this is — I would guess — pretty universal. Maybe your dog loves a type of food that my dogs don’t. Maybe your dogs go mad for aniseed whereas my dogs love cheese. Just a sec, wait. Not a good comparison — aniseed and cheese are pretty much universal must eats’ on the canine menu (if your dog likes neither, please let me know — in the name of science).

So, if I set out to train Mia with bananas as my choice of reward for her, I’d achieve less impressive results — quite simply because Mia doesn’t like banana. She places a higher value on food that she likes, similarly toys and similarly different ways of being touched — Mia doesn’t like to be stroked on the head, Chloe will take a good head stroking for several hours. So we’ve still not established jealousy in canines with this research based on the report as presented on the BBC site.

Studies with various types of monkeys and chimpanzees show they react not only to seeing their partners receiving rewards when they are not, but also to the type of reward.

OK. Well I’m not a scientist but I do know that monkeys and chimps are NOT dogs. They can and indeed probably do have emotions much more closely aligned to the emotion we recognise in ourselves as jealousy, similarly they have different social structures and are NOT dogs. So the relevance of this is no more apt than saying: ”Well humans have jealousy, why can’t dogs?”

Why do I not believe dogs share the emotion we recognise in ourselves as jealousy?

If we think about what jealousy is, if we are logical about what we know about this emotion it is incredibly complex and based on a whole level of social elements.

There are humans who feel jealousy based on widely different factors — is that an innate personality trait in them or is it nurtured? — we don’t really know.

We have humans within the autistic spectrum who simply do not and can not feel jealous and others within that same spectrum who can be wildly jealous. It’s true that even scientists themselves still haven’t universally agreed a definition for what jealously is! That’s how complex this particular emotion is. What does it take to be jealous? It takes two people very, very different reasons to be jealous, even people within the same family who share almost identical genetics. Yet put two people in a room and mimic the paw test’ and we’d never get close to seeing universal results proving jealous responses in people — we’re too different and jealousy is an emotion that does not run through us all in an identical fashion. So why should it in dogs?

I absolutely do not doubt for a single, solitary second that they display behaviour which is very easy for us to compare with the emotion of jealousy that we recognise in ourselves. It could be displayed in acts of resource guarding, it could be manifested by dogs who are particularly greedy, territorial, pack motivated, rank motivated — but jealousy it is not. It is quite possible that I want to get my bosses’ job and sit in his chair, in his office and take home his salary but I am not motivated even in the slightest by jealousy, I simply want to do better for myself. Dogs the same. So a dog going to another dog getting rewarded is absolutely not proof positive — in my view — that we’ve cracked the canine jealousy code, we haven’t even cracked ours yet — and we can SPEAK!

Anthropomorphism is rife. Most of the time it’s harmless but sometimes it’s nothing more than us finding another way to say: ”I don’t understand my dog but I’ll bracket a particular behaviour by benchmarking it against my own”. This is, plainly, crazy. And it can lead to problems.

It will be better for dogs and better for us if we make an effort to better understand them. But always, always, always start that voyage of discovery with one overriding caveat: Dogs are no more human than we are Zebra. They are dogs. They ARE unique and we love them for it. They are masters at making us think what they want us to think. Their understanding of human body language is an art we’re not even close to mastering. Take this example:

Person comes home. Dog has wrecked the post (again). There it is, all laid out scattered over the floor.

”Oh, look at him. Look at that face. Look how guilty he looks.”

Of course he doesn’t know what he’s done’ and he absolutely may look guilty’ but that aint guilt he’s showing, that’s him spotting body langauage and going to fear/survival mode. He’s pretty much saying: ”If you want me to look guilty, if that’s the pigeonhole you want to put me in right now, so long as it means I don’t come to any harm, I’ll do a better guilty repertoire than Laurence Olivier if it makes you happy babe!”

One comment on “My Theory on Jealousy in Dogs (It Doesn’t Exist!)”